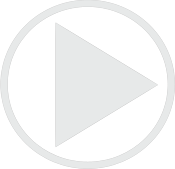 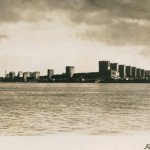 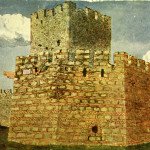 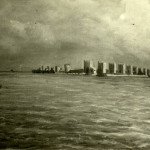 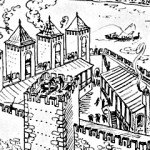 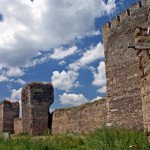 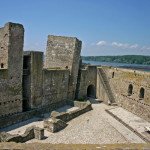 When despot Djuradj Branković started construction of the new capital of medieval Serbia, he wanted to create modern capital city and not just the safe military stronghold. In the course of time Smederevo fortress got all important elements characteristic of the large medieval city. For rather short period Smederevo became vibrant political, religious, cultural, commercial and economic center of Serbia. Therefore, considering the circumstances of its foundation, concept and notions of that time much more appropriate should be the term Smederevo city instead of common term Smederevo fortress.

Unfortunately, historical circumstances contributed to the fact that main idea was only partially realized in the first three decades of its existence (1428-1459). In the later history, Smederevo never had such important role as it had been planned in the beginning.

After sudden death of despot Stefan Lazarević in 1427, new Serbian ruler despot Djuradj Branković was obliged to hand over the capital city of Belgrade to the Hungarians according to an earlier agreement. Geostrategic and political reasons had impact on his decision to build new capital forty kilometers downstream of Belgrade and ten kilometers upstream of the place where Velika Morava empties into the Danube at one of the most important locations in the Balkan Peninsula. This choice offered the possibility for political balancing between Hungary in the north and Turkey in the south that both tried to realize their interests by occupying Serbian territories. Practical reasons influenced his decision to choose slightly elevated area at the confluence of the rivers Jezava and Danube, in a plain, what was not characteristic of fortifications in these areas until that time. Location had good lines of transportation and military-strategic potentials for defense and it offered enough space for expansion of the city in the future and rich agricultural resources for everyday life of the inhabitants.

The very characteristic of the terrain had impact on triangular ground plan while size in spatial and monumentality in architectural regard was in harmony with the role of last stand for which it had been predestined by historical circumstances. Considering the area of 10.5 hectares enclosed within the walls it is classified among the largest lowland fortifications in Europe.

Continuity of life in this area could be followed from prehistoric times through antiquity and Middle Ages, then during Turkish occupation and restoration of Serbian state until the modern times. However, thirty Smederevo years as capital in the crucial times of conflict of civilizations in this area left strong mark, which overshadowed to the great extent the millennia of earlier existence and almost six centuries of later history.

In the life of Smederevo fortress there are six crucial periods:

Smederevo fortress represents the highest achievement of medieval Serbian military architecture. In the accomplishment of its construction are collected many centuries of experience, skill and knowledge of native and Byzantine artisans, but also all anxiety and hope, weariness and waiving, joy and faith of all those who endured main burden of its construction. Although it had been conceived according to the highest fortification standards of that time it became obsolete already during its construction because of the introduction of gun powder in war technique. Neither Serbian, nor Turkish interventions including construction of gun openings and towers did help much in its modernization.

Information about length and thickness of walls, number and height of towers and even about the speed of building conjures up only segment of monumentality of the Smederevo fortress. In fact, the greatest challenge for the builders was lack of stone in the vicinity, so it had been brought from the quarries sometimes many tens of kilometers far. Also large quantities of stone and brick from the neighboring antique but also medieval fortifications and graves had been used.

Main idea that town would develop within the Fortress walls had not been realized during its history, but it generally maintained exclusively military character. Great destructions in the 20th century destroyed the structures in its interior thus the absence of urban structure actually  emphasizes very well preserved original appearance and architectural design of the Smederevo fortress from the first half of the 15th century and it is its greatest value.